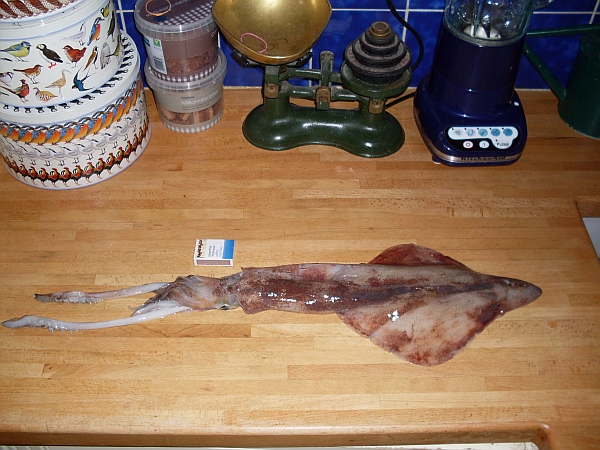 Often on the menu in a Chinese restaurant, this is easy to make. First obtain your squid. This could be fresh caught, shop-bought, or if you have kept your squid bait cool and clean you could cook up any leftovers as soon as you get home (seriously – I do). Most squid sold for bait is the same as boxes of squid sold to restaurants. Go to a Wing Yipcash and carry, you will see what I mean. The amount of squid you have will determine whether you are about to make an appetizer, snack or meal.

Prepare your squid by pulling off the head, cutting off the tentacles in a bunch just under the eyes (discard the eyes and guts), slit open the tube and scrape both sides clean with a knife. Cut into 2cm squares, rinse and pat dry on kitchen paper.

Grind up the salt, pepper and chilli in a pestle and mortar. If you want a slightly less authentic version just use half the quantity of ground black pepper, table salt and a good pinch of chilli powder. Mix in with the flours. Put a 2cm depth of oil in a pan and heat until a cube of bread turns brown in 30 seconds. Toss a small handful of sqiddy bits in the flour to coat, shake off any excess and drop in to the oil for one to two minutes, don’t overdo it. Light brown is fine. Scoop out with a slotted spoon and drain on kitchen paper. Give the oil time to reheat and repeat the process until the squid is used up. Nice served as a snack with lemon juice squeezed over, and speared with a cocktail stick. I like extra salt too. It may not be a great idea to tell your posh guests where the squid was earlier. (Good Food recipe)

P.S. Alternatively make a beer batter by pouring lager onto a handful of flour until it is the consistency of double cream, then dip your prepared squid into it before frying as above. It makes the lightest, crispiest batter!