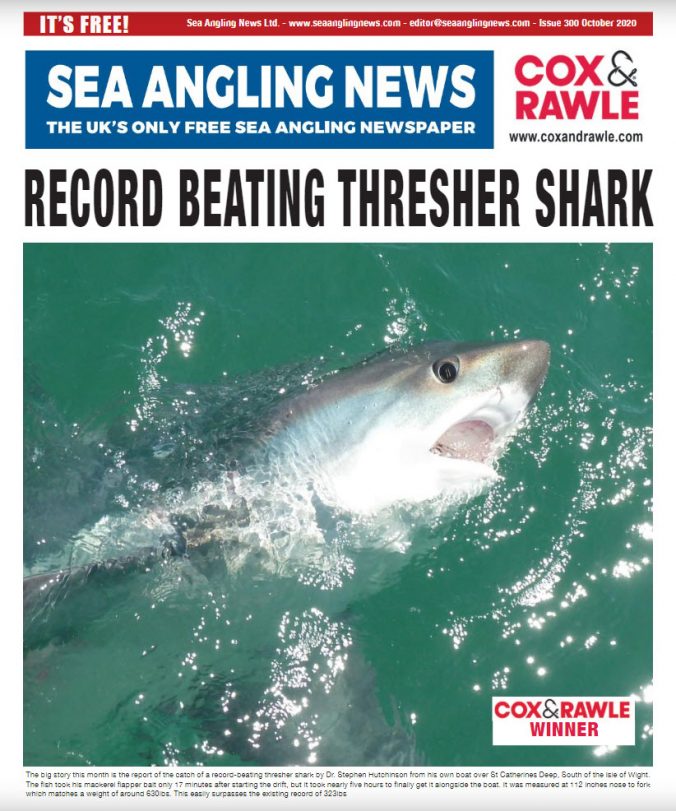 You know September has arrived when someone somewhere says they had heard that a codling had been caught in the Solent. Then someone else jokes “That’s the one caught for the year then” and you secretly wonder if they are right. Well, a couple of small codling have been caught, the Southsea Marina Angling Club have opened their Cod Pool and also confirmed the annual Cod Open Competition, which will be held on Sunday 8th November. Prevailing Covid-19 rules will be observed and the prize table is still to be announced but going by previous years, it will be generous and will attract a lot of local boat anglers. Keep an eye on the local Facebook pages for further details.

Looking back at the last month we have a couple of very interesting fishy stories to share. The first one isn’t a catch as such – a 396lb (180Kg) Atlantic bluefin tuna was washed up dead in Chichester Harbour and was recovered by the team at Thorney Island Sailing Club. Simon Horsfield kindly provide the photos of this huge fish which was in very good condition and showed no sign of damage. It was taken away for analysis by Sussex IFCA but no cause of death could be established. Although these fish are rare and it is illegal for anglers even to target them, it is rather exciting to know that they and possibly similar species are active in the local area.

The second big story is the report of the catch of a record-beating thresher shark by Dr. Stephen Hutchinson from his own boat over St Catherines Deep, south of the Isle of Wight. The fish took his mackerel flapper bait only 17 minutes after starting the drift, but it took nearly five hours to finally get it alongside the boat. It was measured at 112 inches nose to fork which matches a weight of around 630lbs. This easily surpasses the existing record of 323lbs but isn’t as big at the largest thresher recorded which was caught commercially in 2007 weighing 1,250lb. Dr. Hutchinson’s shark was released so cannot qualify for a record claim, and will join the list of other record-beaters caught locally which were released by conservation-minded anglers.

Meanwhile, the rest of us were catching much smaller fish but having plenty of fun nevertheless. The summer plaice marks are still producing a few fish and the calm sunny days make drifting for them a very pleasant experience. Another tasty fish, the red mullet isn’t specifically targeted here but they are welcomed when they do turn up, either to add to a species tally or if they are big enough, to add to the pot.

Rays can be relied on to put a good bend in a rod and the blond rays run to a good size – Clive Smith and Guy Chandler both caught blonde rays of 21lb and Ray Jenner one of 24lb. We have a good stock of undulate rays and thornback rays on the shingle banks and a good thornback ray can put up a worthy struggle as Chis Satow can confirm.

Further offshore over the wrecks and banks anglers are still targeting bass. Kev Johnson boated a superb bass of 11lb 10oz on a scad livebait. The wrecks are where you will find bass and pollack but you will also catch other fish. Dennis Fuller caught not one but two of the much rarer John Dory, largest 2lb 8oz.

After a dearth of mackerel during the summer a few more are now showing up which is just as well because we need to stock freezers for winter bait. The whiting and hopefully even a cod or two will be here soon so I expect we’ll be including them in the next SMAC catch reports.

Until then, Tight Lines and we’ll hopefully see you at the SMAC Cod Open on 8th November. Huge thresher shark caught off the Isle of Wight