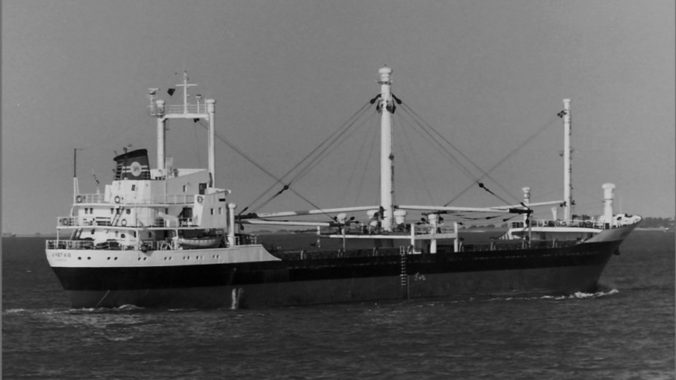 The mystery of the “Dean Tail Wreck”

This wreck is a popular angling mark where in summer many boats stop to feather for mackerel. It is easily located by the north and south cardinal buoys marking the wreck and shows as a distinctive hump on the fishfinder screen.

You may also know the wreck as the Flag Theofano MV, a freighter built in 1970. She was 324 feet long, weighing 2,818 tons She had several names in her 20 years of service before sinking in January 1990. But why did she sink? Why was her loss not discovered sooner? What happened to most of the crew? The circumstances of the wreck remain a mystery.

On the 29th January, Flag Theofano was carrying 4,000 tons of bulk cement from Le Havre to Southampton, with a crew of 19. That night a severe storm drove many ships to find shelter making it very difficult for the marine traffic controllers to find safe berths for them all. They were unable to provide a berth for Flag Theofano so she was called on the radio and instructed to anchor off Bembridge in the area called St Helens Roads, where many commercial vessels can be seen anchoring today. This was acknowledged by Captain John Pittas and the marine traffic controller then continued to look after other vessels in the area.

The next morning, Flag Theofano was called on the radio with new berthing instructions but there was no reply. Other vessels nearby were called but they could not see the vessel. She had disappeared. The full horror of the situation was revealed when two empty lifeboats, a life-raft and two bodies were found nearby. Flag Theofano had sunk, nobody had heard a distress signal and nobody had seen it happen. At the time they didn’t even know where the wreck was located.

Boats searching the area came across an oily patch in the water, bubbles escaping and ropes attached to something below the surface. As soon as the weather eased, divers were sent down and found the wreck upside down on the seabed 20 metres below the surface right by the main shipping lane leading to the Solent.

Salvage operations started in August 1990 but by now the cargo of cement had come into contact with the water and fully hardened, creating a huge block of concrete that was impossible to move, either to locate any bodies or to salvage the wreck. The bodies of the 17 remaining crew were never found. They may still be under the wreck, or they may have been swept away in the storm.

Nor do we know why the ship sank. It must have been sudden or distress signals would have been sent. Possibly the cargo shifted in the storm leading to a capsize, but was this before she anchored, or did she drift from the anchorage to Dean Tail later in the night? We will never know. It seems bizarre in this age of total electronic surveillance that even in 1990 a ship a few miles from land can simply disappear and not be missed for hours.

The only human connection we have to this wreck is the unmarked grave of one of the sailors in Portsmouth’s Kingston Cemetery: Ibrahim Hussain who was only 19 years old. If you pass the wreck at Dean Tail, spare a thought for him and his 18 colleagues (all from Chios Island in Greece) who have been forgotten by history and are just a distant memory to their families.

If you would like to know what the wreck looks like close up, this video on YouTube gives a rather murky view. The wreck is lying on a seabed of mainly mud covered in a layer of shells.