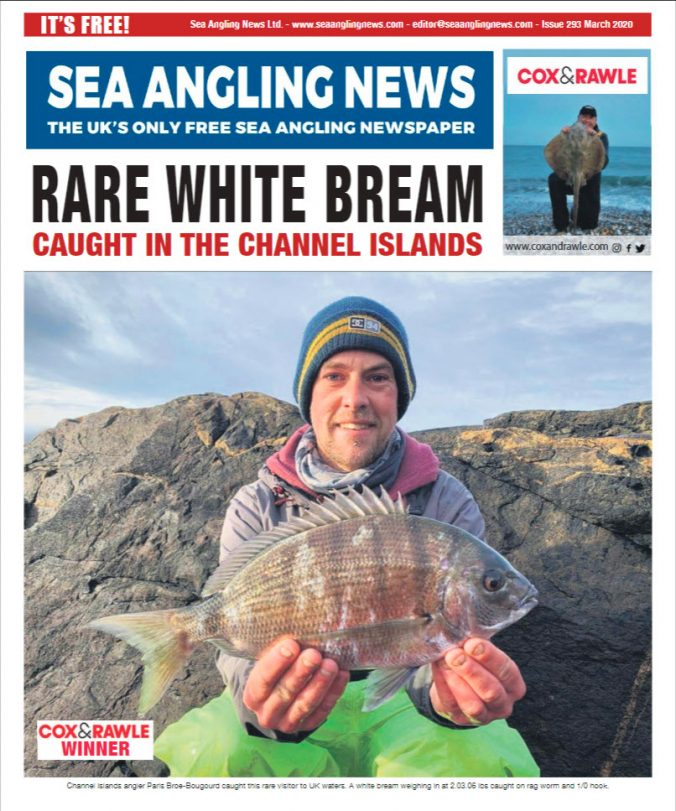 Thanks to Storm Ciara and Storm Dennis putting paid to two weekends since the last report, we have only had half the opportunities to go out. Fewer than that actually, because the weather around the storms hasn’t been great either. I expect the inshore mussel beds will have been rearranged so the plaice marks will have to be re-discovered. On the plus side, if you wanted to stock up on slipper limpet for bait there were plenty strewn all over the shingle beaches.

Pride of place in this report is an impressive cod caught by Dean Gibbs from his own boat, fishing in deep water south of the Nab Tower. A squid bait lured this 22lb 10oz fish, big by any standard along this coast and particularly impressive given how few cod of any size have been caught this winter.

This month we are between the winter season and the spring run of fish, although smoothhound and garfish associated with summer have confused everybody by turning up in January! Debbie Harvey shows off her smoothhound with the white cliffs of the Isle of Wight in the background, a popular mark throughout the seasons. Ray tend not to be migratory and can be caught at any time. On the same trip Debbie also landed this nice thornback ray. Jason Gillespie was also fishing south of the Nab with squid bait and instead of the hoped-for cod he instead boated this impressive blonde ray of 28lb.

The winter run of spurdog have thinned out now but some are still being caught. Heber Crawford shows a nice specimen with the distinctive first and second dorsal spines.

February is traditionally a good month for the larger pollack from the mid-channel wrecks, if there is a weather window allowing small boats to reach them safely. Arron Shons was delighted with his 20lb pollack, and a number of other big doubles on the same trip. Kev Johnson shows another good pollack, caught during much calmer weather before the storms arrived.

We have an active community of young anglers locally and it is great to see their success – even if sometimes they out-fish us. James Smith aged 10 caught this 30lb conger on mackerel and squid by himself, although as you can see he needed help to lift it off the deck because it’s as long as he is.

Many of the charter boats take February off for a re-fit before the spring run of fish. They are mostly back in the water raring to go so if we can find some quieter weather before the next issue of SAN we should be reporting on the first plaice caught. I think many of us are relieved the disappointing cod season is over and we are all looking forward to the arrival of more smoothhound, bream and tope in the next few months.

By the way, Arron Shons is the Redgill prizewinner in this month’s SAN! Congratulations.